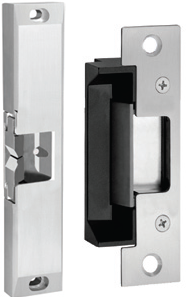 An electric strike is an access control device used for doors.

An electric strike is an access control device used for doors. It replaces the fixed strike faceplate often used with a latchbar (also known as a keeper). Like a fixed strike, it normally presents a ramped surface to the locking latch allowing the door to close and latch just like a fixed strike would. However, an electric strike’s ramped surface can, upon command, pivot out of the way when the lock on the door is in the locked position and the door is opened, allowing a user to open the door without operating the mechanical lock or using a mechanical key. After the door is opened past the keeper, the keeper returns to its standard position and re-locks when power is removed or applied, depending upon the strike’s configuration.